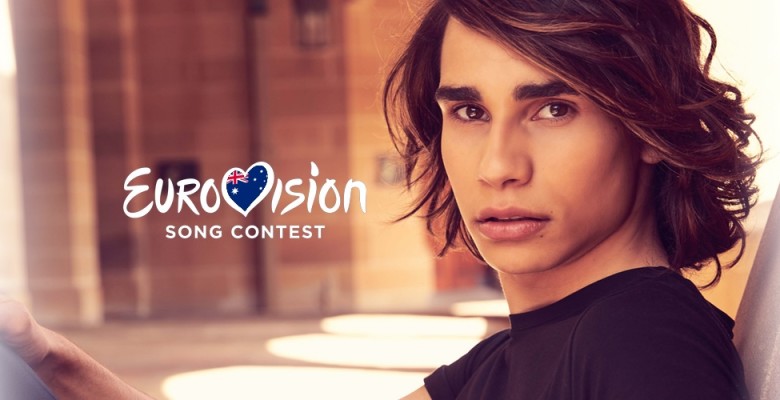 SBS has announced Isaiah Firebrace as Australia’s contestant at the 2017 Eurovision Song Contest, which will be held in Kyiv, Ukraine, and broadcast exclusively on SBS in May.

Isaiah’s new Eurovision song Don’t Come Easy was also revealed tonight, performed by the artist on stage at an intimate event in Melbourne.

You can listen to Don’t Come Easy and take a first look at Isaiah’s Eurovision video clip here:

The Eurovision Song Contest will be broadcast over SBS’s Eurovision weekend – Friday 12, Saturday 13 and Grand Final Sunday 14 May at 7.30pm on SBS with LIVE early morning broadcasts begin Wednesday 10 May at 5am on SBS.

Hailing from the small country town of Moama, 17 year old Isaiah first stepped into the spotlight last year when he was crowned winner of The X Factor Australia 2016. Isaiah’s story is one of determination and passion for music, honing his craft with six hour round trips from regional Victoria to singing lessons every week, aspiring to become a professional artist.

Isaiah is already experiencing global success, with his first hit It’s Gotta Be You going Platinum in Sweden, and charting in over 15 countries including Australia, Denmark, Norway, Sweden, Canada, and the US.

Isaiah’s Eurovision song Don’t Come Easy is an emotive ballad showcasing his vocal range and unique ability to connect with powerful lyrics, which, in this track, speak to fighting for your dreams even when it isn’t easy.

“I’m so proud to be representing Australia as our entrant for the Eurovision Song Contest 2017. Even though it has been a dream of mine, never did I think for one minute it would be a possibility. To be able to share this news with my family and friends is unbelievable. I can’t wait to go to the Ukraine to perform ‘Don’t Come Easy’. I will make Australia proud. Thank you to SBS and my label Sony for believing in me and giving me the opportunity of a lifetime.”

Australia can get behind Isaiah from his first performance in Semi Final 1, which will be broadcast on Wednesday 10 May LIVE at 5am on SBS, and in primetime Friday 12 May 7.30pm on SBS . Isaiah will have to be voted through Semi Final 1 to then have the chance to compete for the Eurovision title in the Grand Final, with Australians setting their alarms for an early wake-up, or hosting their Eurovision parties at night to find out exactly how the all-important votes land.

First broadcast on SBS in 1983, SBS has a long standing heritage with The Eurovision Song Contest, the world’s largest song competition that celebrates and brings together diverse cultures through music. Isaiah is the third Australian artist to be invited to compete, following Dami Im who was runner-up in 2016 and Guy Sebastian who finished fifth in 2015, with Jessica Mauboy a guest performer in 2014.

The 2016 Eurovision Song Contest was a success for SBS with the competition reaching 3.7 million Australians across all three broadcasts combined, with a 13% audience growth in the Live Grand Final, and an 82% lift in online visits year-on-year.*

“The theme of Eurovision this year is ‘Celebrate Diversity’ and we are once again thrilled to be participating in a global event which could not be more aligned with SBS’s own purpose. Isaiah is a young artist who beautifully embodies the Australian spirit with his passion, hard work and humility, not to mention immense talent at just 17 years old. We are proud to have him represent our country, and can’t wait to see him shine in Kyiv.”

“At only 17, it’s a truly remarkable achievement for Isaiah to be representing Australia in Eurovision this year and I am very proud that he has been given this opportunity to showcase his immense talent on this global stage.

“Isaiah is currently capturing the world’s attention with his first single, ‘It’s Gotta Be You’ which has surpassed 50 million streams on Spotify after only 3 months and is already Platinum sales in Sweden and just about to reach Gold in Denmark. incredible voice, humble nature and great determination will win the hearts of Europe with ‘Don’t Come Easy’, written by powerhouse song-writers DNA songs (David Musumeci and Anthony Egizii).

“I am also delighted that Sony Music Entertainment Australia will be partnering again with SBS CEO & MD Michael Ebeid and his team along with the very talented Paul Clarke from Blink TV in bringing Australia’s voice to the Eurovision song contest.”

“It was exciting for all Australian Eurovision fans to come so close to winning last year. We wanted to come up with something totally different for this year, yet just as powerful as Dami. With Isaiah we have an artist who has a unique ability to cast a spell with his voice, and we will build our stage production around showcasing his quite staggering vocals. DNA’s composition is a perfect vehicle for Isaiah, and it was such an exciting collaboration to be part of. It literally gave me tingles to hear it completed. We can’t wait to present it on the stage in Kyiv.”

More information on how the Australian public can vote, who the jury deciding 50% of the Australian vote will be, and an exciting announcement on who the new SBS Eurovision hosts are is coming soon!

Stay tuned to the SBS Eurovision website for updates www.sbs.com.au/eurovision