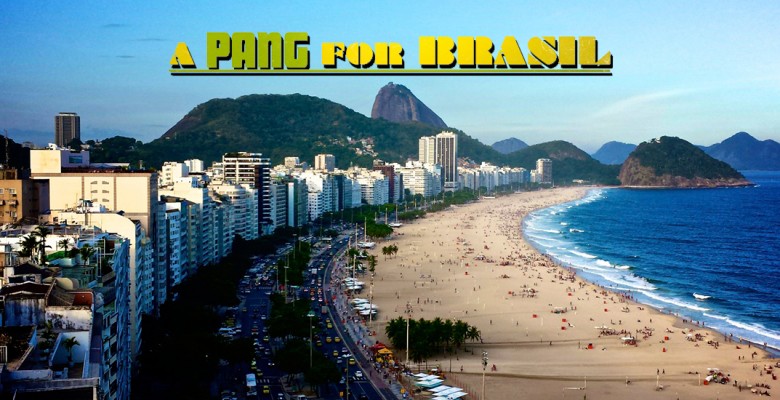 Blink TV was in Brasil in early 2014 with Sam Pang to bring you “A Pang for Brasil”.

Sam Pang attempts the impossible as he travels around Brasil, trying to blend in with the coolest race on the planet.

Ah, Brasilians. Famous as a race of gorgeous, sexy, dangerous, beach loving humans. Great dancers, passionate love makers and of course, incredible footballers. In other words, everything that our host, Sam Pang wants to be…

Sam Pang begins his Brasilian adventure in Rio de Janeiro, the beautiful city of beautiful people. With the help of local comedian Veronica Debom, Sam experiences a Carioca makeover, and after a wax and shopping trip for a sunga (the Brasilian budgie smuggler) is unleashed onto the beach, the heart and soul of Rio culture. Sam looks to be finding his feet, and some friends, as he tries a Brasilian version of beach volleyball played with the feet, but naturally spends more time falling flat on his face.

For his education in Brasilian nightlife and women, Sam meets with model, DJ and Madonna’s ex-boyfriend Jesus Luz. No visit to Rio would be complete without loosening the hips, so Sam takes to the streets for a dance off in the favela, and must keep in step with samba veterans in an underground club.

The Brasilian crash course continues as Sam travels to Sao Paolo and Salvador. In Brasil’s largest city Sao Paolo, he spends a day high flying with local model-turned business mogul millionaire Cozete Gomes, whose preferred mode of transport is private helicopter. Then Sam comes back to reality with a trip to the favela to meet with rapper Criolo. Sam gets his football fix and learns to bend it like a Brasilian, and acquires a new taste for Amazonian cuisine. In the party town of Salvador, Sam learns to drum with the legendary carnival band Olodum and discovers that he was Afro-Brasilian in a past life. For one last adventure, Sam returns to Rio to audition for a role on a telenovella – the ultimate test as to whether this Aussie has what it takes to pass as a Brasilian.

Behind the scenes on A Pang for Brasil

I knew nothing about Brasil. I mean, apart from ‘The Girl From Ipanema”, Sergio Mendes “Brasil 66”, and Ayrton Senna. I’d seen a couple of TV shows – but when I watched Clive James or Michael Palin talking about Brasil on television, the one thing that never came through was what the people were like. I found this frustrating. Gradually, it dawned on me that it was an enormous opportunity. We set out to make this series as a comedy of manners, where a typical Australian male – averse to being touched, not too romantic, none too expressive physically, shocking with his own language let alone Portuguese, is dropped into a nation of people more comfortable in their own skins than any on the planet. The nation with the greatest singers, music-makers, dancers, lovemakers, soccer players. Then he must try to walk like a Brasilian. It turned out to be a rewarding premise, which sat well with Sam Pang’s natural reserve and awkwardness. Some of the results were hilarious, and were great fun to film. The Brasilian people we filmed all got the joke from the outset, and were a joy to work with. Comedienne Veronica Debom, DJ and Madonna muse Jesus De Luz, rapper Criolo, musicians Olodum, zillionaire Cozete Gomes, and Telenovela star Mariana were all very generous to us. But probably the best fun we had was just walking the streets of Salvador in the evening with no plans, and just filming what happened. It was one of the greatest sequences of my career. I urge you all to go there and make your own sequences. You have to get over the fear factor. Everyone I knew was concerned about me going to Brasil… I was sure to be robbed, kidnapped or held hostage. “Don’t die, dad!” was my son’s farewell plea. I was amazed by how wonderfully we were treated, how contagious their joie de vivre was, and how stunningly beautiful their country and people. They may not be as prosperous as Australians, but Brasilians really know how to live. They are a very cultured, dynamic people – and they are way cool. Hopefully this comes across in our series. To walk the beach at Copacabana confirms that the only pecking order in Brasil is one of beauty – we gringos went to the bottom of the pile immediately. Sam Pang was the perfect presenter to show off our ineptitude in the face of Brasilian savoir faire. Sam allowed us to put him through a series of humiliating experiences, but I was fascinated by the fact that the more difficult the going got, the more vulnerable he became, the more he was liked by everyone who met him. Thanks and well done, Sam. We have worked with Sam since we introduced him as a host back in 2007 on AD/bc, and it has been a pleasure to work and travel with him through many destinations and various milestones in our lives. He really honed his ‘I’m a stranger in a strange land’ school of broadcasting covering Eurovision with us over the past six years, sometimes to great comic effect. He continues to get better as a broadcaster, and this series is, I believe, the best thing he’s ever done. I want to thank SBS for backing him from the start, and continuing to back him. I must apologise if all you were looking for was a ‘strap on your boots, Sam’s going to give you the good oil on the world cup’ kind of story. But hopefully, this more lateral approach to Brasil will connect you to who they really are, and give you a few laughs along the way. I have to thank our researcher Danielle Brigham in New York for her wonderful ideas and detail in connecting us with some brilliant people. Bryan Moses wrote a great set of shooting scripts from Los Angeles, and is always a brilliant collaborator, an engine of ideas. Our sensational Swede, the DOP Torbjoern Karvang, made the pictures look incredible, and our editors Andrew Soo and Bryan Moses, and co-writer / post-producer Alex Barry, really made the series something special. More than anyone, I need to thank supervising producer Stephanie Werrett for the daunting task of connecting Brasil to our requirements, constantly making the difficult simple, and to setting up a wonderful experience. Finally, I would like to thank SBS Head Of TV Tony Iffland for approaching us about a series, the terrific SBS Commissioning Editor of Entertainment, Caterina De Nave, for developing the idea with us, and Head Of Commissioning Alison Sharman for her help in greenlighting the series. SBS is a pleasure to have as a network partner, and I hope this series is a big success for them.